Why put a therapeutic magnet
in motion?

In my introductory page and why use magnets page I introduced the concept that magnetic force can speed up the electrons in the water molecule making its structure more useful for living cells.

In this page I will introduce the concept of maximizing this process for optimum therapeutic benefit.

If a magnet sits still on a copper wire it does not generate an electric current. It has to move across the wire to generate a current. The principle is that energy has to be put in to get energy out. If a magnet is setting still the electrons are moving and will try to line up other electrons to spin in align with them. It takes motion of the magnet to push the electrons to move faster.

If you set a container of water on a strong magnet it will slowly get molecules of water with faster electrons. Why? Because liquid water is always in motion. If you spin the magnet or the water the change will be much faster and more complete. There are companies that make appliances that spin water with magnets and feature them as water optimizer or making hexagonal water. I have one and believe that it improves the water for cooking and drinking.

What is going to happen to the water under the magnet that you have taped or strapped to your body?
Stop and think about it; by design the fluids in your body are in constant circulation to carry oxygen and food to the cells and waste away. Therefor gradually the water doing this gets more energized and can do it more effectively. What would happen if you could keep the magnet moving over the spot needing therapy? The beneficial effect would be more rapid.
To apply this principle a magnetic bracelet should keep the magnets close to the skin because the magnetic field gets weaker very rapidly as it gets further away but a magnetic bracelet fit should be loose enough to move with the motion of your arm.

Under therapist magnet I discussed having a cylinder or sphere magnet that can be rolled over the area to be treated. But what if you could have the magnet move while you are holding it still? To achieve the benefit of a moving magnet having a greater therapeutic benefit with the convenience of keeping it concentrated on one spot inventions have been made.

I have used a spinner made to adapt NIKKEN roller magnets to spin. I added a stronger magnet to make it penetrate deeper. and it worked well but not as professional as the " Magneton".

But could a magnet be made to move in a way that is even more effective?

NIKKEN developed a patented method called Biaxial Rotation. By spinning a ring with a magnet on a shaft through it, the magnet can tumble as its pole turns to line up with a magnet outside the ring. This means that the lines of magnetic force are constantly cutting through the tissue in different directions with more chance of passing through a water molecule.

The original model is called "Palm Mag" It has been updated to an oval shape that is easier to hold but the older ones available on eBay is equal in therapeutic effect.
They made a miniature version which I like to use because it fits completely within my palm while I am applying therapy with my fingers. It was discontinued because failure before warranty expiration. I have been able to keep them going. The first failure I had I disassembled and found a broken spot weld on the three rechargeable batteries inside. It worked after soldering the break. The majority had not really failed; the battery had formed a charging barrier because the sat to long between use. I noticed that when turned on and and the charger indicated full charge when unplugged from the charger they would make a slight movement. By repeating this many times they would start charging and running for longer periods. Now they run for one or more hours on each charge again.

The most powerful is the "Body Energizer". It has six biaxial magnets. It is designed to have three Biaxial magnets under each foot while seated. It is not strong enough to stand on but it can be put behind your back or shoulders while seated if that is the area of more pain.
NIKKEN makes a magnetic detector for demonstration purposes. It detects the magnetic field generated by a magnet when passed by it. When the "Body Energizer" is first started under the feet it will light up half way to the knees. After it is run for a while it can detect a field next to the thigh above the knee. Later it is often detectable at the hip.

you can make one yourself 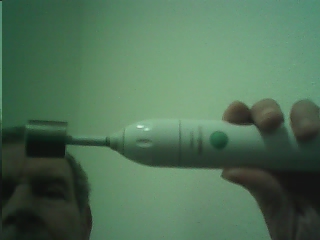 This is a Philips Sonicare tooth brush modified to be used as an ultrasound magnet therapy tool. Use an old brush head when you replace it with a new one. The heads unscrew and can be changed back and forth so you can continue to use the tooth brush feature

Replaced brush head with cylinder magnet with 1/4 inch hole in center. Cylinder is magnetized across the dynamiter so that North is away from the label side of power unit and angle of head makes application easy.#link for cylinder magnet_

#link for one inch cylinder_

#link Magnet Therapy How and why_walll

How do I Use Magnets for Pain?

How to Use Magnets for Water to Drink

You may need a magnet where it does not hurt.